A startup that makes environmentally-friendly packaging for IKEA is planning a big transition into the realms of lab-grown meat and beyond.

Ecovative – which made a name for itself by inking deals with brands like IKEA and Dell to swap styrofoam containers for packaging grown from fungi – now wants to use its mushroom-growing capabilities to become the backbone of several manufacturing efforts, including plans to make meat without slaughter.

It may sound like a strange pivot. But an important obstacle for the “cell-based” (or “clean”) meat industry is taking the raw materials for meat – lab-grown cells from the fat and muscle tissues of pigs, cows and chickens– and crafting them into materials that copy the complex texture and structure of a chicken breast or a marbled meat.

Several startups in the space “claim” to have succeeded in making prototype products that take the form of sausages, burgers, and meatballs. Although, these products involve essentially smashing together a mix of fat tissues and muscle fibre – not creating actual pieces of flesh that mirror the real thing. What could be missing is a good scaffold, a delicate structure on which the cells can thrive.

Ecovative wants its mushroom technology to be that scaffold.

Using a new platform which the company is calling MycoFlex, Ecovative will be able to tailor a foam-like product it makes from mushroom roots (or mycelium) and craft it into a variety of end materials, from performance foams for clothing and shoes to cellular scaffolding for lab-grown meat. In April, the company worked with the licensee and fellow startup Bolt Threads to make the first MycoFlex-enabled product, a leather-like bag made with the material it called Mylo.

Most recently, Ecovative has also been trialling growing animal cells on the MycoFlex platform. 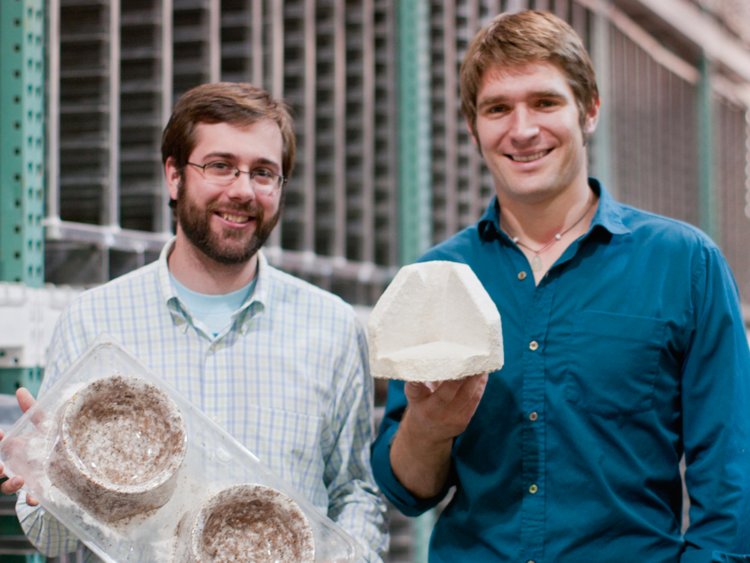 “The key thing mycelium does is go from a single-celled organism to a 3D structure in space. We’ve been growing animal cells on it and they have been growing really well” said Eben Bayer, Ecovative’s co-founder and CEO.

If it works, the partnership could help usher in the first slaughter-free products with the texture and structure of steaks and fillets.

The mushroom’s unique structure is hard to find elsewhere in the vegetarian-friendly organism kingdom. Plants can only do so much. But fungi knows no such boundaries.

“If you look at plant scaffolding, you’re limited to the geometry of something like a spinach leaf,” Bayer said. “With mycelium, we can make a sheet that’s many feet long and however thick. We can control the density. It’s this massive scaffold you can grow relatively inexpensively.”

Ecovative’s mushroom-powered structure could have uses beyond the lab-grown meat space as well. In the plant-based food arena, for example, mycelium could be used as the foundation for new, even meatier versions of already popular vegetarian items like the Bill Gates-backed Impossible Burger or the Beyond Burger.

Those companies could essentially “use our scaffolding and infuse it with their ingredients and flavourings,” Bayer said.

Several other startups aiming to replace animal products with vegetarian options have turned to fungi for its preferential texture and naturally neutral flavour.

For now, Ecovative isn’t sure which path in the sustainable food arena – whether it’s cell-based meat or plant-based meat alternatives – the company will end up pursuing the most heavily. The company’s primary goal is to make its mycelium design platform available to everyone.

“This is the next natural step in this evolution to use natural products to make things,” Bayer said. “As the biology advances and the tech advances alongside it, you’re going to see more people building on this platform.”

From Making Mushrooms into IKEA Packaging to Lab-grown Meat

5 Governments Backing Blockchain Projects around the World
My Account